Learning to care and nurture ourselves in times of stress can make a world of difference to our health and enjoyment of life. Finding activities that you enjoy, the nutrients that support you and surrounding yourself with people who respect and love you are keys to body, mind and spirit wisdom.

It seems that now, more than ever before in human history, people amass are experiencing intense emotional/spiritual stress. If emotional/spiritual stress goes unchecked it will eventually manifest as physical stress. “Issues become tissues” is not just an anecdotal statement – it is a fact. Repressed feelings become unconscious reactions and responses responsible for destructive life patterns and unconsciously programmed behaviours. These repressed feelings can cause physical as well as mental and emotional symptoms and conditions. Unprocessed life events are the cause of so much pain and suffering.

Consciously or unconsciously people are living out of the programs, patterns and conditioning of their life experiences, their families and their ancestors. Learning how to listen to your body is one of the most powerful tools you can cultivate as a human being. Managing the challenges of your mental health resides in fostering your ability to tune-in to your body, decode its messages and use that information to regulate your experience of yourself and your life.

Consider cultivating the daily habit of feeling into your body to find your stress holding patterns. Pay attention to any area of tension/holding, breathe deeply and focus relaxation into the area as you exhale. Repeat until you feel the area relax and let go. Repeat as often as necessary.

December 2020, we are excited to offer a very special package containing three of our favourite stress busters. Each product has been carefully selected for its specific stress reduction effects. 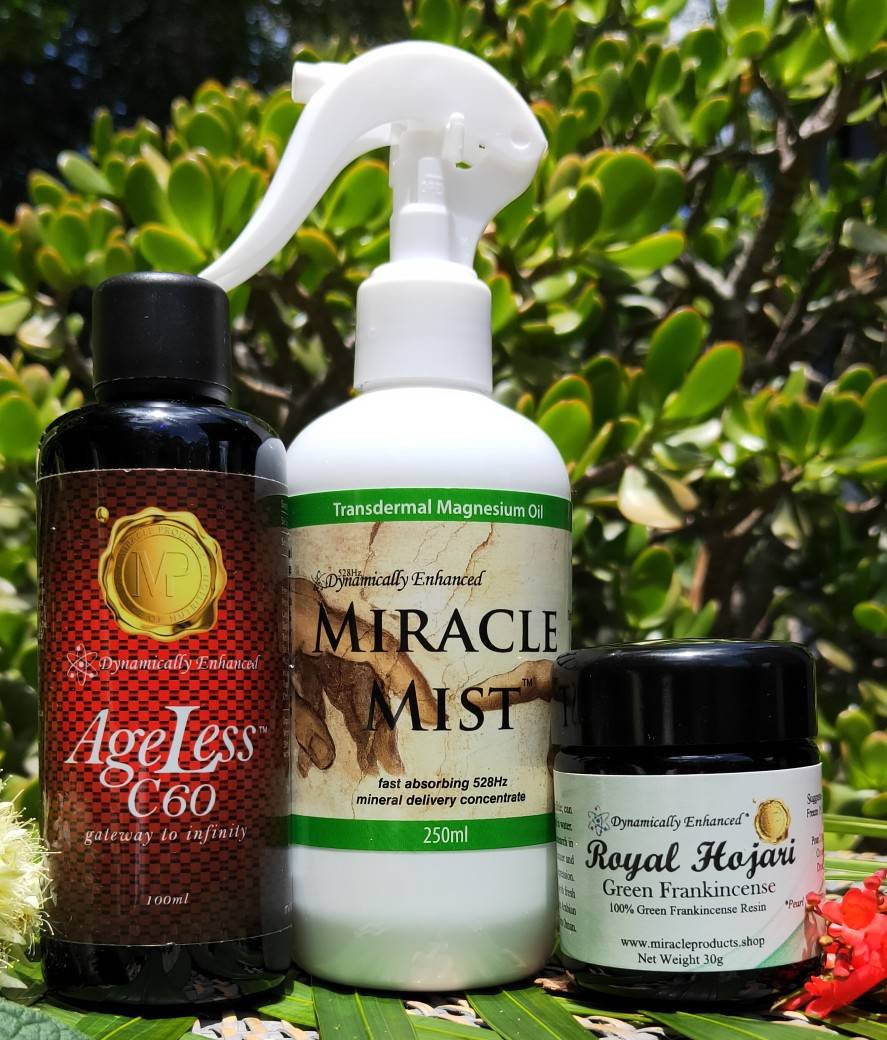 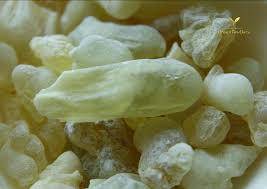 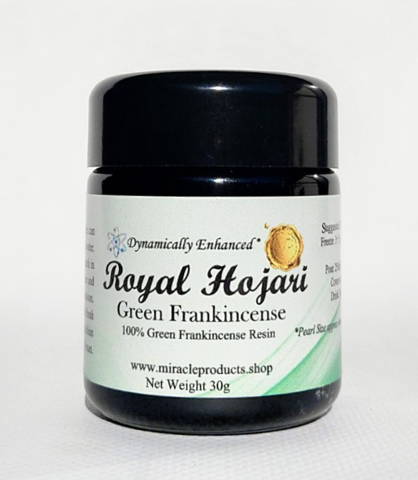 Royal Hojari is the rarest and most potent of all Frankincense. Unlike other Frankincense this is a medicinal grade variety and it can be orally consumed.

For at least 5000 years Frankincense has been used in meditation, prayer and healing because it was known to assist in removing negative energy and creating an elevated spiritual awareness. It is often used to lift moods, ease anxiety, calm emotions and for purification of body, mind and space. The heavenly aroma has been an integral part of spiritual and religious ceremonies in every ancient civilisation in Europe, North Africa, the Middle East, India and China.

Only recently, modern science is rediscovering the properties and uses of this ancient and revered resin. Clinical trials are investigating Frankincense use to alleviate depression, heal wounds, relieve inflammatory gastric symptoms, ease arthritic pain and stem the spread of cancerous cells.

Royal Hojari Frankincense water has been a traditional drink in the Middle East for centuries. People in Oman and Yemen usually soak Royal Hojari resin in water overnight and drink the water. According to their doctors, only few people over there have cancer.

Many spiritual traditions contend that burning incense is good for the soul. Now biologists have learned that it is good for our brains too. An international team of scientists, including researchers from Johns Hopkins University and Hebrew University in Jerusalem, describe how burning Frankincense activates poorly understood ion channels in the brain to alleviate anxiety or depression.

Gerald Weissmann, M.D., Editor-in-Chief of The FASEB Journal. “The discovery of how incensole acetate, purified from Frankincense, works on specific targets in the brain should also help us understand diseases of the nervous system. This study also provides a biological explanation for millennia-old spiritual practices that have persisted across time, distance, culture, language, and religion-burning incense really does make you feel warm and tingly all over!”

Burning Incense Is Psychoactive: New Class Of Antidepressants Might Be Right Under Our Noses

Burning frankincense (resin from the Boswellia plant) activates poorly understood ion channels in the brain to alleviate anxiety or depression. Many people report the same immediate benefits when chewing the resin or consuming the water concentrate.

Frankincense has been used throughout the ages for: 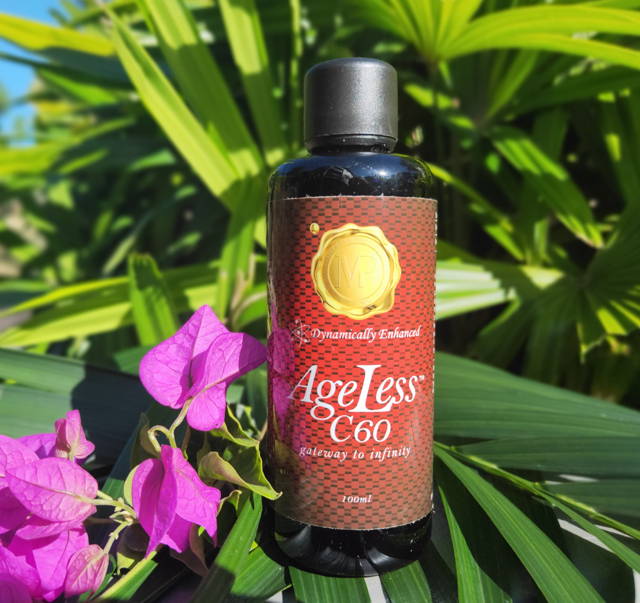 AgeLess C60 contains the most extraordinary antioxidant-catalyst. As a substance that is naturally generated from star dust (the very origin of life) it seems that carbon 60 (C60) provides the matrix which assists the body in returning to its pristine condition. This extraordinary substance is born in the heart of stars and comes out of stars. At the end of a stars life, when it has been turned into a husk, C60 is released into the galaxy. This remarkable element causes stuff to grow and is the reason our earth has so much life.

Called “the magic molecule” in the Aug. 1991 issue of Popular Science, the discovery of the carbon 60 molecule took academic chemistry and physics by storm. Carbon molecules are subject to extensive research, carbon is a fundamental building block of most of the molecules of life. C60 however, is unique among carbons, as it is the only known element with spherical, cage-shaped molecules. The new 60 atom carbon molecule won discoverer Harry Kroto, a British chemist, a 1996 Nobel Prize.

The effectiveness of C60 to protect cells from degradation is beyond anything known to date. It has been shown to quickly and easily neutralize toxins, heavy metals and free radicals. C60 has even been demonstrated to neutralize normally lethal doses of hepatotoxins (a toxic chemical that damages the liver).

The carbon 60 in AgeLess C60 is purified through a sublimation process which insures there are no solvents; unlike C60 that is purified with solvents and vacuum baked to remove solvent residue. Sublime C60 is 99.99% pure, created using a prolonged and time intensive but natural non-toxic process.

AgeLess C60 contains the highest concentration of carbon 60 available, with minimum saturation of .80mg of C60 per 100ml of olive oil. The sublime carbon 60 is dissolved in organically grown Extra Virgin Olive Oil and bottled in biophotonic violet Miron glass, which is superior to any other types of glass for protecting and enhancing our product. 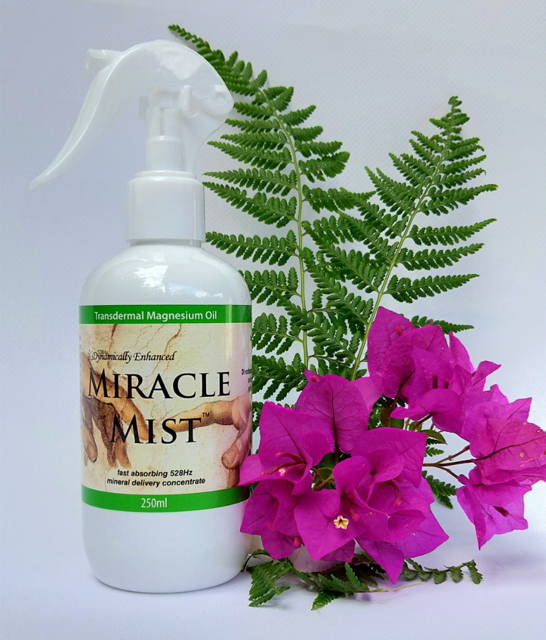 Magnesium chloride is known as a miracle mineral for really great reasons. It is essential for so many body functions and enzyme production. In fact there is now known to be well over 350 specific enzymes that must have magnesium to functions properly in your body. Even more than that, it is natures great relaxer; not only for muscles and tissues but for the whole central nervous system. But it energizes too! It stimulates cellular energy – so it’s a relaxer but also a stimulator. By stimulating cellular energy, it’s really great for fat burning and it also plays a major part in sugar regulation too.

Most people aren’t getting enough and one of the ways that you can tell is if you are feeling stressed. The more stress you are under the more your body uses it up and the more you need it. We are not just talking about physical stress, which is absolutely valid, so a lot of athletes will actually apply Miracle Mist before a meet and find that it’s very helpful in increasing energy and stamina and they don’t get the lactic acid build up. But more than just physical stress it’s also one of the keys for emotional stress. If you have a lot of anxiety and nervousness one of the benefits is to use it daily – consider it as your personal stress protector.

Now it’s important to know that taking magnesium orally doesn’t seem to have, and in fact is shown to not have, the same benefits as when you use it trandermally – through the skin. One of the key things for example, when you take magnesium orally it does not stimulate your body’s production of DHEA. DHEA is the master anti-aging hormone. So, if you want to stimulate DHEA production and expand on your youthfulness, embrace your youthfulness, then you must use magnesium chloride through the skin. One of the best things, as well, when you use it transdermally is that it can be applied any time anywhere – so it’s really easy to use.

It is renowned as the fastest natural pain reliever. Within 26 seconds of application it is absorbed into the blood stream, immediately increasing circulation to flush away inflammation and relaxing muscles and tissues.

In addition to massaging into skin, you can also use hot packs with cloths soaked in Miracle Mist. As a rescue remedy it is unsurpassed! If you bump, knock and bruise or burn yourself apply Miracle Mist immediately to avoid painful bruising & swelling. It should also be immediately applied to the head in any case of concussion to protect the brain. Miracle Mist can also take the sting out of burns and reduce or eliminate blistering. It is also effective as an antiseptic to alleviate pain and itching from an insect bite.

It is well documented that magnesium is vital for the health of the brain and nervous system. Magnesium has a calming effect on the nervous system and it is frequently used to promote good sleep. But more importantly, it can be used to calm irritated and over-excited nerves. Because of its strong relaxing effect, magnesium helps not only to have a better sleep but is also useful in overcoming headaches and migraines. It really is the feel good mineral.

There are hundreds of published clinical studies that document the body’s requirement for magnesium and numerous examples of miraculous 'cures' from the use of this vital mineral. Magnesium deficiency has been scientifically identified as a critical factor in the onset of such a vast range of disease, from heart disease, diabetes, hypertension, inflammation and stroke, to Alzheimer’s, autism, cancer and many more.

Signs of magnesium deficiency include:

We are very proud of our Miracle Mist™ formula and only use premium Dead Sea magnesium chloride flakes. In addition, Miracle Mist™ is fortified with pure distilled MSM and boron. MSM is an organic sulphur natural food supplement, essential for the health of all body systems; including younger looking skin, healthy hair and nails.

MSM is critical to the formulation of connective tissue and widely used to alleviate inflammation and arthritic pain. Boron is an essential trace mineral which enables the body to hold and retain minerals. It is also noted for its hormonal regulating factors. These three essential synergistic minerals are then imbued into distilled structured water (many competitors use tap water). The completing step and crowning glory is dynamic enhancement to produce our beautiful trademarked formula Miracle Mist™

John Stuart Reid (a pioneer in acoustic research and cymatic measurements) has proven that 528 is essential to the sacred geometry of circles and spirals consistent with DNA structuring and hydrosonic restructuring. 528Hz frequency is utilised by bio-chemists to initiate repair of damaged DNA and is known as the “Transformation and Miracle” frequency.

There are incredible benefits from this energy when carried into cells by Dynamically Enhanced® supplements. Scalar enhancement is known to strengthen DNA bonds making it more resistant to damage, cleanse the blood, fortify the immune system and restore overall vitality.

This energy is unifying for body, mind & spirit coherence.

In addition Scalar energy has other amazing properties. It can cancel out the harmful effects of radiation such as computers, microwaves, other appliances and the damaging electromagnetic fields cause by 5G.

Amazingly, once a supplement has been Dynamically Enhanced® the effects can actually grow stronger weeks or even months after being embedded. The effects are so powerful that it has even been shown to repair itself. Scalar restores coherence, even after disruptive exposure to radiation, like X-rays and 5G.

Back to Blessed Body