Did you know that your skin is your body's largest organ and absorbs up to a litre of water in an average shower?

Did you know you can experience an oxygen rich, health revitalising shower that can change your life?!

First, lets break down the parts of this filter, then we'll dive into the 6 reasons it will help you shower the way nature intended... 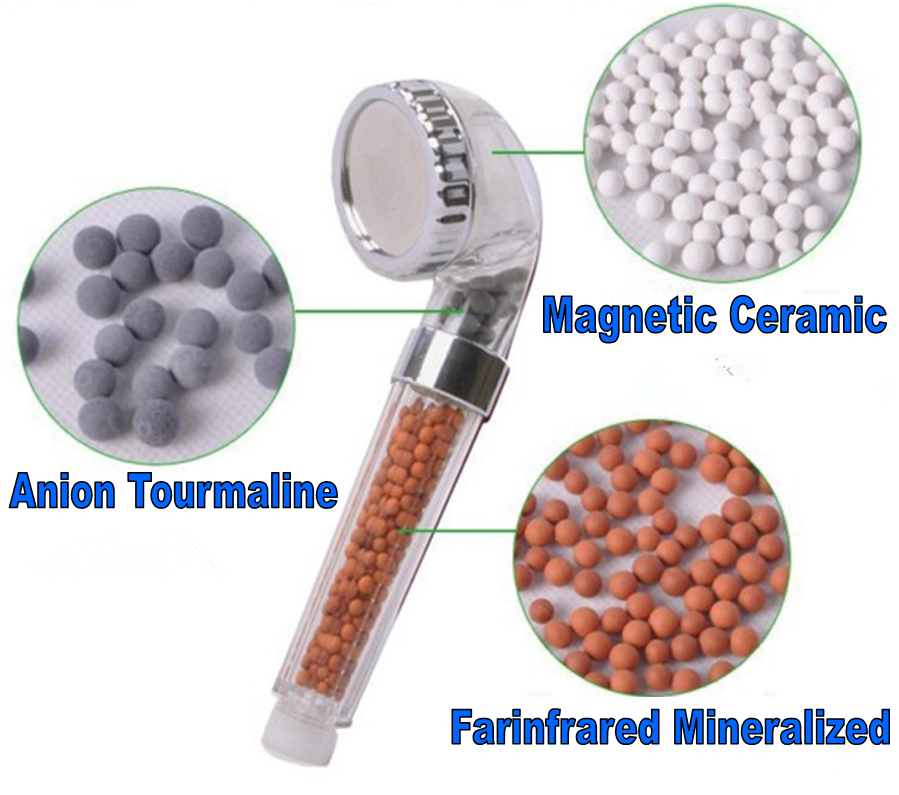 One Vortex Shower Spa Filter will last a family of 4 approximately every 12 months pending water quality.

But the REAL MAGIC is Inside the Filter Where You'll Find Specialised Filter Balls Consisting of:

It is the spiralling vortex action of water moving over energised balls that refines water molecules into smaller, highly charged clusters and breaks the bonds between water molecules and pollutants. This creates life giving rather than energy taking water. It is highly coherent (stable) and frees excess oxygen which supports aerobic bacteria and kills anaerobic microorganisms.

Anion Tourmaline balls release 0.06mA bio-electricity in the water. This serves the function of purifying and revitalising the water, generating indispensable minerals for the body, including Calcium, Potassium, Magnesium and micro-elements; as well as reducing water molecule size.

Smaller clusters pass through cell walls with ease; hydrate the cells quickly, while simultaneously making the water refreshing and lovely to drink.

Although this is very weak current (0.06 mA), it is same current as the human body's bio-electricity. Bio-electricity in the water breaks down large water molecules into micro-clusters, resulting in beautiful structured activated water.

Anion Tourmaline balls provide a pH of 7.5 – 8.5, are antibacterial and release mineral micro-elements.

Do you have skin issues?

Anion Tourmaline activated water has been shown to improve atopic dermatitis while bathing. Water containing residual chlorine will irritate the skin; tourmaline can stabilise the residual chlorine to reduce skin irritation, so you can enjoy bathing.

Far infrared ceramic balls release a subtle electric current in the process of treating water. It’s essential for humans and other organisms to maintain electrical balance of their bodies. Far infrared creates 660nm wavelength, which duplicates the healthy frequencies of our own cells.

The FIR (far infrared) mineralised balls have been shown to effectively absorb lead and other toxic heavy metals. FIR has been used in the treatment of clogged capillary vessels; this heat expands the capillaries and skin pores to expel toxins from the body.

Plus, it increases the oxygen content of water which also helps with detoxification!

The emission rate of FIR mineralised balls can be greater than 90%; this allows for a slow and even release of over 20 kinds of trace elements necessary for the health of your body. So you feel like you're showering in a waterfall...ahhhhh:)

Some very exciting research done in Hungary has shown that these clusters actually have a memory and can remember and carry an imprint of the magnetic energy they have been exposed to. Atomic structure of magnetised water molecules will change from dissonant to coherent hexagonal structure; determined by X-ray diffraction method.

Vortex Action
Water in its natural optimal state is structured – full of life force energy – Vortex Water Faucet Filter mimics nature and restores life force to water...like a WATERFALL...ahhhhhh:)
It is the spiralling vortex action of water moving over energised balls that creates stable structure. The centripetal & centrifugal vortices which refine water molecules into smaller, highly charged clusters and breaks the bonds between water molecules and pollutants. This creates life giving rather than energy taking water. It is highly coherent (stable) and frees excess oxygen which supports aerobic bacteria and kills anaerobic microorganisms.
Structured water produces negative oxidation reduction potential (ORP) and supplies the body with beneficial negative ions. We naturally get negative ions from the Earth if we stand on it with bare feet & this helps us detoxify.
Negative Ions Help:
Neutralise free radicals
Revitalise cell metabolism
Enhance immune function
Purify the blood
Balance the autonomic nervous system, promoting deep sleep and healthy digestion!
The Vortex Water Faucet Filter is a natural and safe way of obtaining negative ORP water; as opposed to using an artificial system for generating negative ORP water through electrolysis, (such as those used in Electrical Water Ionisers), which have been shown to have some negative health effects.
As water spirals through the Vortex Water Faucet Filter, structure is fine-tuned and coherence is established among molecules, creating perfect hexagonal structured water that is full of biophotonic (QI) energy (clear of all negative vibrational memory) and rich in ORME.
What is ORME?
Technically speaking; the vortex action within the inner chamber breaks the chemical bonds releasing elements in their monatomic or diatomic form. These spinning elements are referred to as ORME (orbitally rearranged monatomic elements) or more commonly ORMUS.
The monatomic elements form cooper pairs/electron pairs that spin so rapidly they become bound together. Cooper pairs stabilize elements so that they become chemically inert. The difference between ORMUS element and its normal mineral counterpart is a matter of frequency and spin.
Spiritually speaking; particles that spin faster vibrate at higher frequencies and posses’ greater energetic potential. These ORMUS elements behave like superconductors and people who consume structured water – rich in ORMUS, over prolonged periods report improved clarity, greater focus, heightened awareness and robust health.
It's "HIGH VIBE" water:)

Vortex Action is SELF CLEANING and Revitalising!
Vortex Shower Spa Filter creates negative ions producing a fresh clear environment which is great for your body.
Negative ions enter the blood stream accelerating the delivery of oxygen to our cells and tissue; they also stimulate and revitalise cells which assist the body's defences against disease.
get vortex shower

Back to Blessed Body